​"I wanted to be perfect"

Jackie has surprised us these days, by something more than her talent or her voice, she has done it for what she, in a way, has called "moments of truth".

I confess that a big percentage of the things I knew about her now have surprised me and have broken my heart, I will not deny that I always saw her as someone very shy, and as she grew that was increasing, I knew that she had insecurities, but I did not think it was to the point of creating her all that series of big problems, and I also knew that she knew some things (or dangers) that has been around her (those old men, ya know?) but I did not think that that would create all those fears that she was getting.

I must confess that I have always had some worries, because when you give your whole life to something, that "something" takes a part from you, that is the law of life, right? Deep in my heart I always had a certain concern for her and I always wished for her to do it well, well, things are not to lost, despite having been hard, she is there, in one entire piece, strong and brave to fight the battle.

So let's be clear, at age 18 Jackie Evancho tells us that she has felt lonely most of the time, that she has been diagnosed with anorexia, body dysmorphia, depression, she has said that at this point in her life she does not trust absolutely on anyone, unless  is family or someone who has spent a lot of time close to her, she has said that being surrounded by old men who wanted to hurt her has created a lot of fears and insecurities that has even made her feel uncomfortable near her grandparents (imagine that!) and at the end she just says "I wanted to be perfect".

"I wanted to be perfect", that has been clicking on my head all these days and hours, yes, the showbiz is guilty for setting such high standards for young artists, for generating such a wild competition for the supremacy of the best, the most beautiful, the most perfect, the Internet is guilty for creating a world of beautiful and perfect people that is not real and in which children and young people see reflected, distorting their realities, those adult men (and of course also women) obsessed with children looking for ways to approach them with such horrible and degenerate purposes are guilty as well, and here I want to stop for a while, I've seen too much in Jackie's fandom in all these years that it has been hard for me to keep myself inside, I swear to you, some of those old men are still here, hungry wolves disguised as tender lambs (like those pseudo priests who tried to reach her), yes, I've seen everything in almost 10 years as a fan of Jackie, like creepy people, weird and obsessed people in worrying levels, haters with lives so bitter that they turn their bitterness on her and her family, stalkers who have persecuted her all around the internet, at her concerts and even at her house, people so mentally unbalanced that they make other fans to  believe that they are her friends, that they talk to her every day, people who make up stories in their heads, where Jackie loves them and asks them to "save" her, people that, believe it or not, have real Jackie altars in their houses , and a long list of crazy things that I even can't say. And in that cluster of things that have pushed her into that ravine (thank God she has the parents that she has and the family that she has and that smart head on those shoulders that she has), as I say, in that cluster of things we are, YES, her fans, ALL (good, bad, crazy, normal, etc) of her fans and let me explain it.

All or almost all of us here (and you can't deny) felt almost the same when we saw her for the first time, we were all impressed by her voice, her talent, her tenderness, she was all a little blond angel with a wonderful voice, it was as if every time she entered a room, that room was illuminated, she was all smiling, blue eyes, golden hair and angel voice (to a greater or lesser extent we all felt the same) and for 2 or 3 years that was like that, until she began to grow, some of us managed to be realistic and grounded and understood that it was just an impression, something that was not totally real, I mean, she IS nice, talented, sweet, kind, shy, she is beautiful and has a great voice and talent, but she is above all a human being, with defects and virtues, with good hair days  and bad  hair days, she is naughty, potty mouth (yes we are potty mouth too, come on guys!) and even cranky, like everyone, you know, like a normal human being.

And that's where our guilt starts in all this story. Some people can't see that, some people have not left (and have not wanted to leave) from that time in 2008 or 2010, some people are not seeing the reality, some people put the barr so high for Jackie Evancho that when Jackie Evancho started to grow up and understanding things, she wanted to stay on that high barr, in that place of perfection, in that "angel altar" where some people have placed her, Jackie Evancho unconsciously has fought day and night to be perfect because she just did not want to disappoint all those people who pretended that she was perfect. When you have thousands of people telling you that you are perfect, that you are an angel, that you are the best thing that has happened to them in their lives (that your voice cured them from cancer, YES there were people who said THAT), one day you wake up being a teenager, realizing that you are not what you see on the internet, realizing that you are not perfect, but being aware that the people who are "out there" expect you to be perfect 24/7/12/365, because they tell you that ALL the time, they scream things to you in the audience, they give you standing ovations. You HAVE to be perfect, but reality shows you that you are not, and demons start to haunt your head.

​She has said it in some interviews in all these years, she has written it in some of her posts in the past, she has written it in her songs, she has asked us to not put her on a PEDESTAL, but we have not wanted to listen, in our stupidity and emptiness we have tried to create a perfect being, without mistakes, almost an angel, without realizing that she was just a shy, vulnerable girl, with fears, insecurities and mistakes like any human being, yes, with an impressive talent, but only a human being, and we have been too selfish to accept it.

We are still on time people, she has spoken, she has told her truth, she has said what she feels and thinks. PLEASE listen to her, please. I believe that all of us, without exception, must take the time to analyze our own behavior in these years, we must be honest with ourselves, we must assume our part of guilt, be it small or big, no matter, we must accept that we are also guilty in all this and we must remove the masks, we must shake ourselves and see the reality, that Jackie Evancho is a human being, a talented one, yes, but that she needs our help, and the best help we can give her (besides keep following her career, obviously) , is to see and treat her as what she really is, a human being. 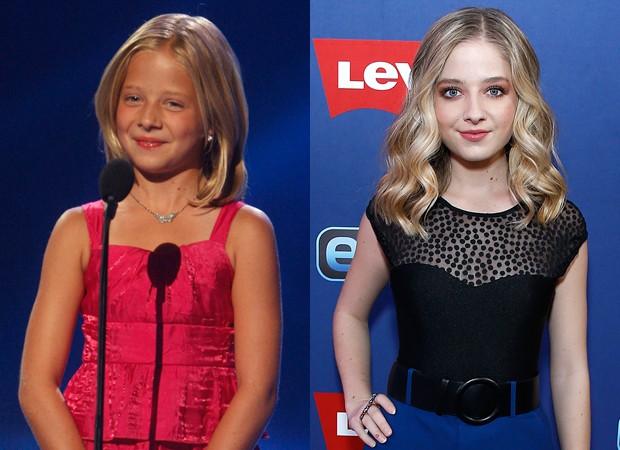